A research guide accompanying the Ernst Haeckel illustrations exhibit in the Dartmouth library. Each panel of the exhibit asks the viewers to reflect on different aspects of Haeckel's work. 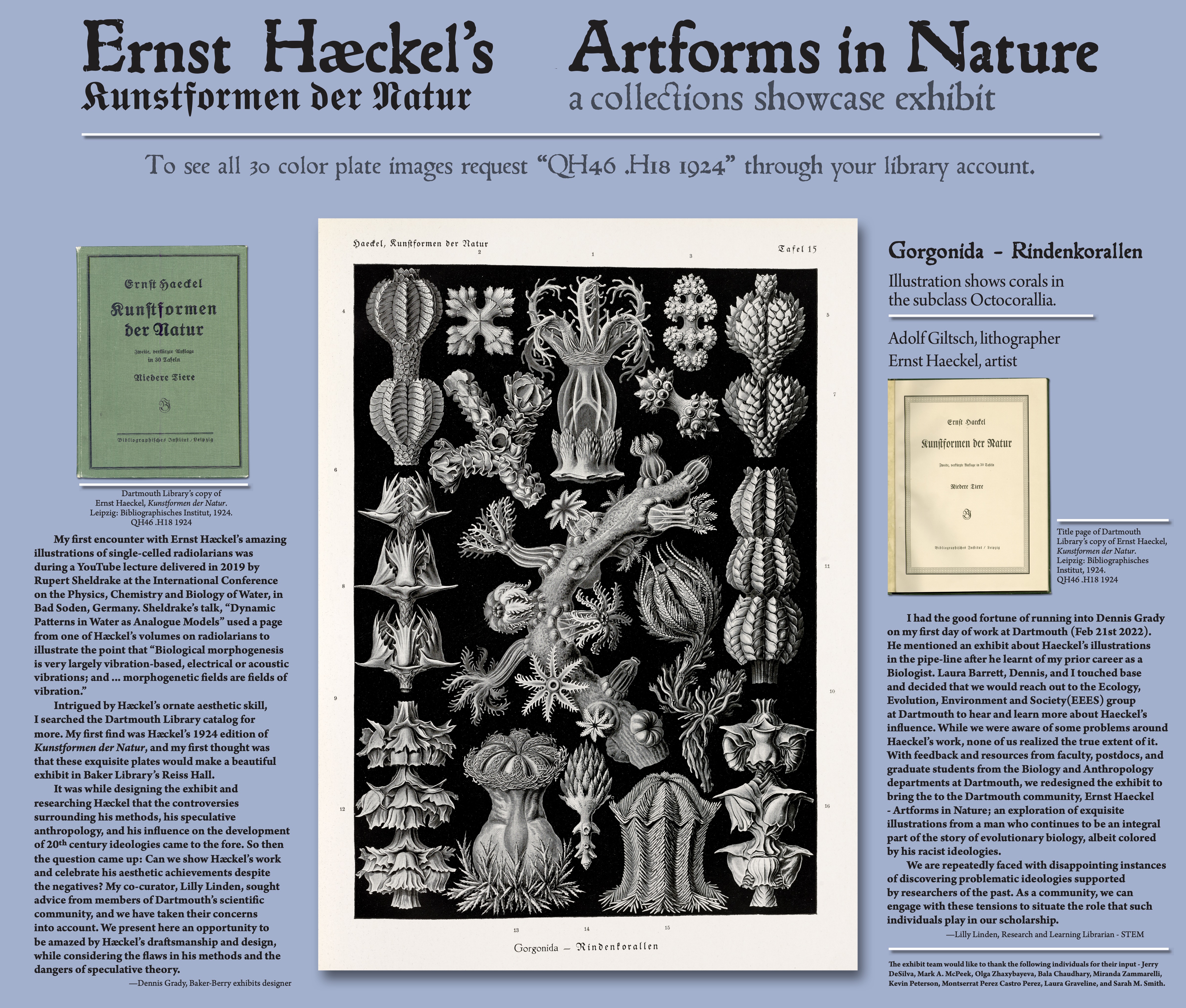 I had the good fortune of running into Dennis P. Grady on my first day of work at Dartmouth (Feb 21st 2022). He mentioned an exhibit about Haeckel’s illustrations in the pipe-line after he learnt of my prior career as a Biologist. Laura Barrett, Dennis, and I touched base and decided that we would reach out to the Ecology, Evolution, Environment and Society(EEES) group at Dartmouth to hear and learn more about Haeckel’s influence. While we were aware of some problems around Haeckel’s work, none of us realized the true extent of it. With feedback and resources from faculty, postdocs, and graduate students from the Biology and Anthropology departments at Dartmouth, we redesigned the exhibit to bring the to the Dartmouth community, Ernst Haeckel - Artforms in Nature; an exploration of exquisite illustrations from a man who continues to be an integral part of the story of evolutionary biology, albeit colored by his racist ideologies.

We are repeatedly faced with disappointing instances of discovering problematic ideologies supported by researchers of the past. As a community, we can engage with these tensions to situate the role that such individuals play in our scholarship.

My first encounter with Ernst Haeckel’s amazing illustrations of single-celled radiolarians was during a YouTube lecture delivered in 2019 by Rupert Sheldrake at the International Conference on the Physics, Chemistry and Biology of Water, in Bad Soden, Germany. Sheldrake’s talk, “Dynamic Patterns in Water as Analogue Models” used a page from one of Haeckel’s volumes on radiolarians to illustrate the point that “Biological morphogenesis is very largely vibration-based, electrical or acoustic vibrations; and ... morphogenetic fields are fields of vibration.”

Intrigued by Haeckel’s ornate aesthetic skill, I searched the Dartmouth Library catalog for more. My first find was Haeckel’s 1924 edition of Kunstformen der Natur, and my first thought was that these exquisite plates would make a beautiful exhibit in Baker Library’s Reiss Hall.

It was while designing the exhibit and researching Haeckel that the controversies surrounding his methods, his speculative anthropology, and his influence on the development of 20th century ideologies came to the fore. So then the question came up: Can we show Haeckel’s work and celebrate his aesthetic achievements despite the negatives? My co-curator, Lilly Linden, sought advice from members of Dartmouth’s scientific community, and we have taken their concerns into account. We present here an opportunity to be amazed by Haeckel’s draftsmanship and design, while considering the flaws in his methods and the dangers of speculative theory.