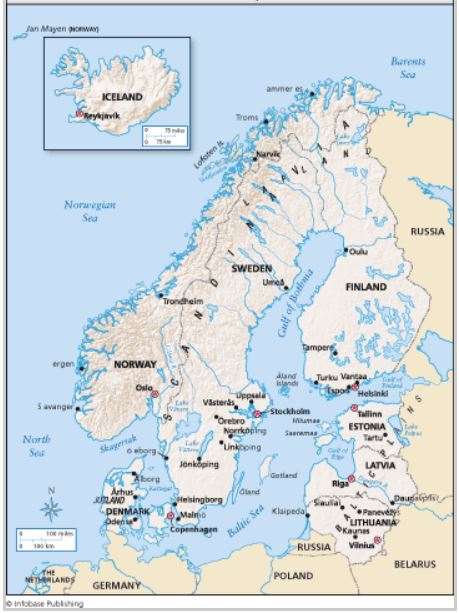 This guide includes resources for Denmark, Finland, Iceland, Norway and Sweden. You can use the subject headings below to find resources in the online catalog. The call number ranges are also included. Please note: these are not the only call number ranges, but they have the majority of items.

Scandinavia (which, strictly speaking, comprises Sweden, Denmark and Norway but is commonly taken to include the other Nordic countries, Finland and Iceland) played a major role in the early development of cinema, with exchanges of personnel between countries, as well as throughout wider Europe, especially Germany and Russia, being commonplace into the 1920s. Some very old established production companies still survive: for example Nordisk Films Kompagni (Denmark, founded 1906), Svensk Filmindustri (Sweden, founded 1907), and Norway’s Norsk Film, founded in 1935. From the 1930s through the 1950s, all the Scandinavian national cinemas tackled issues surrounding the modernization and urbanization of what were until lately rural societies: these concerns are worked over, for instance, in Finland’s peasant melodramas and in the Swedish rural melodrama. In the 1960s, all the Scandinavian cinemas showed the influence of European new waves, while some (especially those of Denmark and Sweden) gained an international reputation for sexual explicitness (see pornography). The unexportable popular genres of comedy and farce, though showing considerable national differences in style and content, have been consistently popular in their home countries. Cinema is widely regarded in Scandinavia as an art form rather than, or as well as, simple entertainment; and a distinctive element of film production throughout the region has been an aspiration to quality and/or social responsibility, often supported by government funding measures and through national film institutes (these latter being renowned in particular for their support of children’s films). During the 1960s these conditions gave rise to radical social cinemas that challenged censorship institutions, especially around issues of sexual freedom (as in Jörn Donner’s Sixtynine (Finland, 1969) and Mac Ahlberg’s Jeg—en kvinde/I, a Woman (Denmark, 1965)).  ...

See also Film in Denmark; Film in Finland; Film in Iceland; Film in Norway or Film in Sweden in A Dictionary of Film Studies.

You can find many publications which feature articles on Scandinavian cinema. Our collection does not have journals which cover the Scandinavian countries exclusively. You can use Film & Television Literature Index to find articles or use the search box at the top of the page.

Keeping up with the journal literature

Want an easy way to keep up with the journal literature for a national or regional cinema? And you use a mobile device? You can install the BrowZine app and create a custom Bookshelf of your favorite journal titles. Then you will get the Table of Contents (ToCs) of your favorite journals automatically delivered to you when they become available. Once you have the ToC's you can download and read the articles you want.

You can get the app from the App Store or Google Play.

Don't own or use a mobile device? You can still use BrowZine! It's now available in a web version. You can get to it here. The web version works the same way as the app version. Find the journals you like, create a custom Bookshelf, get ToCs and read the articles you want.